Everything you ever wanted to know about Hoole's incredible Tiffany Window....

Art Historian Dr. Robert Mellown's article, originally published in the Winter 1993 issue of Alabama Heritage Magazine is now available on our website. Along with the article, you'll find a link to a series of beautiful details of the window in our Cool@Hoole Flickr page, photographed by Teresa Golson.
But just because we can, here is the article as it appears on the Hoole website! 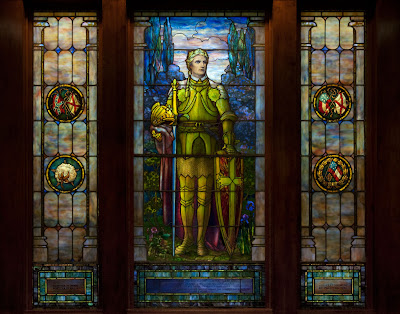 For centuries, this stern and dignified pronouncement by the Roman poet Horace has been associated with patriotism. Appearing on countless European and American war memorials, the Latin inscription also adorns a beautiful stained-glass window in Tuscaloosa at The University of Alabama. Designed in 1925 by Tiffany Studios in New York and commissioned by the Alabama Division of the United Daughters of the Confederacy (U.D.C.), the handsome memorial commemorates the role university students played in the Civil War.
The window is a fascinating social document as well as an exceptionally fine work of art. When it was installed, sixty years had passed since Yankee troops burned the neoclassical campus of the University of Alabama on April 4, 1865. By 1925 the mythmaking of the "Lost Cause" was in full swing throughout the South.

Few Southerners were still alive who could recall the war years, and as their numbers dwindled Confederate veterans and their families (especially their wives and daughters) took steps to ensure that the memory of those who had fought in the nation's most tragic conflict were not forgotten. Memorials of all sorts, in a wide variety of media, were erected in cities, towns, and battlefields across the South.
Perhaps the most ubiquitous monuments erected during this period of romanticizing the Civil War were the monuments to Confederate soldiers placed on courthouse squares throughout the South. Aesthetically, a wide gap existed between those marble or concrete Rebel soldiers, rifle at the ready, and Tiffany's ideal "Christian Knight" depicted on the university's richly colored memorial window. Nevertheless, the sentiment remained the same. An inscription on the window might well be placed on any Confederate memorial: "As crusaders of old, they fought their heritage to save."

The dedication of the memorial window may have represented the zenith of the cult of the "Lost Cause" in west Alabama. The ceremonies took place in front of the newly constructed Amelia Gayle Gorgas Library (now Carmichael Hall), where the window was originally located. The audience consisted of the university community, Tuscaloosans, officers ofthe United Daughters of the Confederacy, and seven elderly Confederate veterans who had been University of Alabama cadets during the Federal invasion of April 1865.
The audience's enthusiasm was whipped into a feverous pitch by speeches, including one by former governor B. B. Comer (also a former university cadet), and by patriotic songs sung by the varsity glee club. These included "We're Tenting Tonight on the Old Camp Ground" and "The Bonnie Blue Flag." According to reporters, toward the end of the program "the Glee club sang the song that these veterans had patiently waited for—Dixie! They leapt gallantly to their tottering feet and the old, wild rebel yell rose lustily, terribly from their feeble throats. After this outburst," the window was unveiled, the setting sun illuminating its rich hues.
The window itself is a showcase of various types of glass and construction techniques which made Tiffany-designed products internationally known. Particularly impressive is Tiffany's use of scores of intricately cut pieces of glass to describe the details of the knight's armor and the delicate details of the landscape.

Tiffany "painted" with glass, his palette consisting of an astonishing variety of luminous opalescent glass that he created by combining white milk glass with one or more colors of pot metal glass. Depending on the combinations of colors, such glass could be used to imitate the veins in the marble columns or the soft hues of the cloud-filled sky.

"Drapery glass" was used to create not only the color but the texture of the knight's flowing robe. This technique, invented by Tiffany, required the glassblower (protected by asbestos gloves) to toss a glob of molten glass on an iron table, where he kneaded and folded the red-hot mixture like bread dough until the desired loops and streaks were formed.

The extraordinary depth and luminosity of the knight's attire, including the shirt of chain mail that extends below his breast plate, were achieved by sandwiching or "plating" several layers of differently textured and colored glass on top of one another. These built-up areas are visible on the back of the window.

To achieve the effect of dappled light shining through foliage in the background, Tiffany used "mottled glass" and a few touches of "confetti glass." These types of glass, perfected in the Tiffany studios, were made by throwing various chemicals (for a mottled effect) or broken glass scraps (for a confetti effect) into the molten glass. As was usually the case, actual paint was used only to define the noble features of the knight, but even here the designer incorporated plated glass to achieve the glow of living flesh.

The production of a Tiffany memorial window was labor intensive, requiring hundreds of hours of work and a high level of craftsmanship. For these reasons, large windows cost several thousand dollars, a hefty sum in 1925, when glass workers received three dollars a day and their supervisors were paid twenty-one dollars a week.

The University of Alabama window cost $5,000, but Tiffany studios gave the U.D.C. a $1,700 discount. Even with the discount, the organization found it necessary to pay off the sum in installments.

In 1939 the Alabama window was removed from the old Amelia Gayle Gorgas Library on campus and installed in the present main library, which bears the same name. This year [1993], in a move partially funded by the U.D.C., the window will be relocated once again, this time to the new collections building on the east side of the University of Alabama campus, where it will grace the walls of the William Stanley Hoole Special Collections Library*.
*The window is in the lobby of the W.S. Hoole Special Collections Library on the 2nd floor of Mary Harmon Bryant Hall, 500 Hackberry Lane, and is visible from the street below. Please visit the library to see the window in person. You can also view a series of photographs we have placed as a set on Cool@Hoole's flickr page. These images were graciously taken by photographer and friend of Hoole Library, Teresa Golson in July 2010. (Photographs in the original article [not shown here] were by Alice Wilson). Special thanks to Dr. Robert Mellown and Donna Cox Baker and Alabama Heritage for allowing us to republish this piece online.
Posted by What's Cool@Hoole at 9:31 AM

The Spirit of Alabama 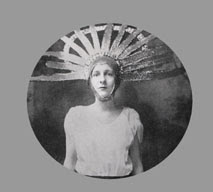 About The Hoole Special Collections Library

What's Cool@Hoole
The W.S. Hoole Special Collections Library is part University Libraries at The University of Alabama, located in Tuscaloosa, Alabama. The Hoole Library is the home to a rich collection of rare books, Alabama materials, over 3900 manuscript collections, extensive sound recordings and sheet music collections, photograph collections, rare maps, paintings and other artifacts, as well as the institutional archives of The University dating back to its founding in 1831. The library is open year-round to the campus community and to the public, and is used by researchers and scholars from all across Alabama, the United States, and the world.

This idea of showing the world "what's cool at Hoole" has been with us for several years in the form of a website or online exhibit, and has had more than a few interruptions in the process. Using Web 2.0 technology, the blog format will allow us the greatest ease and flexibility in giving you the latest in all the things that are happening at the W.S. Hoole Special Collections Library at The University of Alabama. Please visit Cool@Hoole to see images and read information and stories about things that are happening, new things we have received, as well as interesting items from our collections that we might want to feature and talk about. Please visit often and tell your friends! And we'd love to hear from you!

Promote Your Page Too

Do you have a question? Something you'd like to donate to the Hoole Library? Would you like to plan a visit?

We'd love to hear from you!

The W.S. Hoole Special Collections is open M-F from 8 am to 5 pm, with extended evening hours on Thursdays until 9 pm.

We are located on the 2nd floor of Mary Harmon Bryant Hall, 500 Hackberry Lane on The University of Alabama campus in Tuscaloosa, Alabama.